George Washington Locke, Sr., was born in New Hampshire on June 13, 1830. Raised and educated in his home state, by the age of fifteen George moved to Boston, Massachusetts, in order to secure his future as a businessman in the mercantile industry. After moving to Boston, he started working at a wall-paper manufacturer, staying there for six years and absorbing all he could about the business.

When George decided to try his luck in California, he then moved to Sacramento in 1852.  Three years later, he formed a lucrative and lasting partnership with Samuel Lavenson, creating the firm 'Locke & Lavenson' which was located on J street between Third and Fourth.  By 1856, George Locke married Louisa Harmon, daughter of Captain Daniel Harmon of Boston. This union would bear three children; Ella, George Granville and Carrie Locke.

Over time 'Locke & Lavenson' became one of the top mercantile businesses in all of Sacramento, offering only the best in products: fine carpets, draperies, window shades, awnings, oil-cloths, etc. In 1900, nearly 45 years after the start of their business, Samuel Lavenson passed away, leaving the business now solely in the hands of the last surviving partner, George Locke, Sr.  Now was the time for George to begin slowing down and allowing his son, George Jr., to run the show.

George W. Locke, Sr., was not just a mercantile pioneer and one of the oldest merchants in Sacramento, he was also a very wealthy landowner. He had ranches all over Sacramento County and beyond. Some land was used for cattle, horses and sheep, while others were used as a dairy ranches or for agricultural purposes such as orchards and farming, known as George W. Locke & Son. Their pears and asparagus were grown, packed and shipped from their property (where Locke is today) and sent out at the wharf on the riverboat, "The Pride of the River."

George Sr.'s namesake, George Granville Locke was the one who took over his father’s properties when his father decided to retire in his later years. George and Louisa never lived in the town of Locke, their residence was at 1601 L Street in Sacramento, where they remained until their deaths.

On August 21, 1909, at the age of 79, George W. Locke, Sr., passed away at his home. He had been battling illness for some time. He was buried at the Masonic Cemetery in Sacramento, that is adjacent to the historic Sacramento City Cemetery.

In his later years, George G. Locke moved to Southern California, leaving his son, George R. Locke (3rd) to run his father's business mercantile store G.W. Locke & Son, in Sacramento. George R. may have allowed his brothers Clay & Lloyd to take over the area near the Delta, and run the agricultural aspects of the family business, but he would remain a co-owner of the land and very much involved with all the goings on in Locke as you can read in my other posts regarding the "houses of ill repute" in Locke.

Although neither George W. Locke or his son, George G. Locke lived in Locke, both grandchildren, Lloyd and Clay chose to reside on the family ranch nearby. George R. Locke remained in Sacramento.  Eventually Lloyd would leave Locke, and it would be Clay and his wife Alice that remained.
Clay's home is still standing just northeast of where Locke's historic downtown is today. It isn't easy to spot, as the road that takes you there is private property up River Road a bit.
Clay was born on December 20, 1890 in Sacramento, California. The son of George Granville Locke and Alice Smith, and grandson to George Washington Locke.
Clay was one of four siblings: George Robert, Alice, and Lloyd Harmon Locke. When Clay was only three years old, his older sister Alice died from diphtheria. According to newspaper reports, she was only seven years old at the time of her death. She is buried at the Masonic Cemetery in Sacramento.

Clay lived at 1701 K Street in Sacramento, until around 1915-1916, when he permanently moved to Locke, around the same time that many Chinese from Walnut Grove came to set up residence on the Locke property.
Clay would remain there until his death on July 31, 1963, at the age of 72. Clay ran the family business and farmed his land his entire life though sadly he has been all but forgotten as well.

George W. Locke was born on June 13, 1830, in New Hampshire. Raised and educated in his home state, by the age of fifteen George moved to Boston, Massachusetts, in order to secure his future as a businessman in the mercantile industry. After moving to Boston, he started working at a wall-paper manufacturer, staying there for six years and absorbing all he could about the business.

When George decided to try his luck in California, he then moved to Sacramento. This was around 1852. There he eventually formed a lucrative and lasting partnership with Samuel Lavenson in 1855, creating the firm 'Locke & Lavenson' which was located on J Street between Third and Fourth in Downtown Sacramento.

Clay was married to Alice E Mott, who was born on April 21, 1888, in California. She was the sister of George R. Locke’s wife, Nellie Mott. 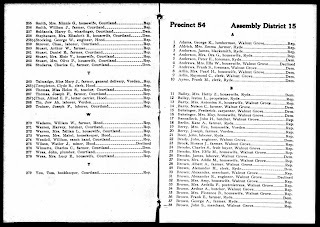 I have been researching the history of the town of Locke for quite some time now. Over the course of my research, I have found that the presented history that you find in books and online in regards to Locke, only tell a one-sided part of Locke's past, and that isn't fair. 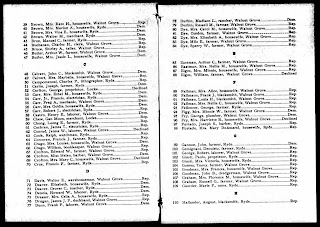 Historians cannot simply on one hand omit pieces of  history and then on the other hand claim that they stand for preserving the origins of the town.  The plain and simple fact is documented, Locke had many residents, some Chinese, some Caucasian, some Japanese and some Portuguese. As time went on the population also had East Indians, Italians, Spanish, Russian, etc. These are the facts.

I have found no concrete evidence that shows that the Chinese "founded" the town, although it is evident they made up a large portion of it. The person who owned the land, George G. Locke (and his heirs) were the ones who allowed commercial buildings to be erected and later residences to form the town of Lockeport/Locke. The town is named after the Locke family who owned the land the town was built on.

It is evident that a large population of Chinese came to Locke in early 1916 after the Walnut Grove fire that occurred on October 7, 1915. There is also evidence claiming that the Japanese approached Mr. Locke first in regards to building a "new living quarter," in Locke before the Chinese had the idea. Apparently, things didn't work out as expected for the Japanese, although several families did move to Locke anyway.  It is also fact that there were some people already living in Locke (Lockeport) before the Walnut Grove fire, although most of the buildings were originally for commercial use.

While researching primary sources, I fell upon the voting registries of the area. I could not find a voting registry prior to 1916 that had the name Lockeport or Locke in it, but  I did find several dating from 1916 and up. Below is a list of "registered voters" listed as living in Locke or Lockeport.  I have printed two of the voting registries for 1916-1918, 1920 & 1926, and I am still not finished yet.  From that documentation alone, I find evidence that Locke was multi-cultural, not just one set group of people.

In the 1916-1918 Sacramento County, California Voting Registry I found an anomaly. There were two lists, although the page headings were almost identical, but the names were different. I checked the registry, and both had the same dates, and were from the same microfilm.  The first one listed on page 538, and the second one on page 1135. Both state "Precinct 54" of "Assembly District 15."

(all residents listed as "Republicans" except for Joseph Parry Rowland, whose party was left blank.)

Are these two registries for two different years, being that the registry covers from 1916-1918? That is quite possible.

Another question that popped in my head was "could it be possible that Lockeport and Locke were at one time two different communities in the same place?"  This is just a thought I have pondered, but at the present time I have no conclusive evidence showing this. Either way, it does not take away from the fact that on that land, in that town there were residents of all walks of life, not exclusively one race or ethnic group.

It also shows there was a lot of registered voters living in Locke or Lockeport, and the Chinese listed in both registries could NOT be listed as registered voters without paperwork showing they were Citizens. If they were "paper sons" and they had documentation saying they were born here, whether the papers were fraudulent or not, it would have given them the right to vote, to own businesses and also own land.  That is a very important point to make here being that one of the biggest arguments you will find in books and online was that the Chinese immigrants were denied rights to own property or have basic rights back then.

Although that is true, that the Alien Land Law of 1913 forbid the owning of property by Japanese, Chinese, Korean and East Indian immigrants, the law only prevented immigrants, not citizens.  These directories are a crucial piece of evidence that show that not only were many Chinese listed as registered voters, but legally they could not have been listed had they not proven citizenship (legal or not).


In upcoming blog posts I will go further in depth into more of these voting registries.

According to the Sac Union newspaper dated September 19, 1920, officers raided the Gambling Den of Fred Bard located in Lockeport (aka Locke). Bard, his wife, and two Chinese employees Ah Wong and Ah Jim were arrested, but were released on $150 bail pending their hearing with Justice of the Peace O'Brien. 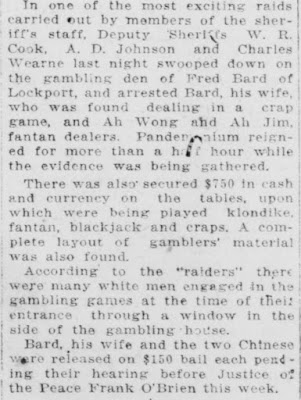 Fred Bard, an Caucasian-American, was born in Pennsylvania in 1882. He is listed as a Republican in both the 1920 & 1926 California Voting Registries, as a resident of Locke. Both directories state he was a "Clerk" or "Merchant." The 1930 Census notes that Bard was a "Proprietor" for his "Refreshment Parlor" in Locke.

Fred Bard was also was a dog breeder and according to The American Kennel Gazette and Stud Book, Volume 34, published in 1922, his prize pooch Lady Bird VII was listed in the publication, (his address also shows as Locke, California).