A Sad Suicide In Locke 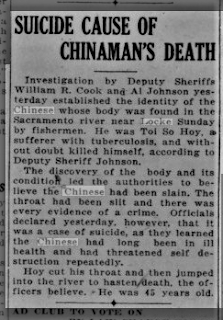 On Sunday, September 11, 1921, fishermen on the Sacramento River near Locke discovered the body of Toi So Hoy, 45, resident of Locke. Upon arriving, Deputy Sheriff's Cook and Johnson started an investigation into the cause of death as well as establishing the identity of the man.  According to the Sacramento Union Newspaper, "The discovery of the body and its condition led the authorities to believe the Chinese had been slain. The throat had been slit and there was every evidence of a crime. Officials declared yesterday, however, that it was a case of suicide, as they learned the Chinese had long been in ill health and had threatened self destruction repeatedly."

As it turned out he was suffering with an advanced case of tuberculosis and had been ill for some time. It was determined that Hoy cut his throat and then flung himself into the river.

There are no records that I could find of that mention if he was buried at a cemetery or not. So as far as we know, this newspaper mention of his death is the only record we have that he existed.  Let us remember Mr. Toi So Hoy, and the painful and very tragic way he died.