At one time Locke was just a fragment of a 490 acre parcel owned by George W. Locke. This estate contained the Locke family orchard, the Locke family house, a barn, their G.W. Locke & Son packing house, and as newspapers note: dormitories for their workers at the packing house. A large span of land behind Locke and north of the property near the slough was also part of the Locke estate.

The town of Lockeport, as it was originally named (a.k.a. Locke) has been around for a very long time. There are records that show the G.W. Locke & Son company shipping their pears and asparagus from the wharf at the river, dated in the early 1900's.

By 1906, the Southern Pacific Railroad constructed a wharf and warehouse for their railroad, which brought working men to this beautiful Delta area. Around 1910, it appears that the building known today as the Locke Boarding House was constructed, more than likely to board railroad workers who needed rest before going back to work on the rail lines, or perhaps it was used as the "dormitories" mentioned in the Sacramento Union (July 27, 1915) that housed some of the workers for G.W. Locke & Son.

By 1912, George Locke allowed three Chinese merchants to establish businesses near the wharf to cater to the railroad workers, and by the end of 1915, when the Walnut Grove fire destroyed the section that housed Japanese and Chinese, the Locke family agreed to allow Lockeport to be built up even more.

By 1916, not only was the new cannery opened, but because it created hundreds of new jobs, it brought people into the Delta from all over the country (and immigrants from all over the world). voting registries and directories from 1916-1918, list various residents of Locke including:


The Start Of The Cannery

The Libby, McNeill, Libby Cannery first opened on April 2, 1916. This was around the same time that the further construction to Locke was underway. Remember, the fire in Walnut Grove happened only about 6 months earlier, in October of 1915. This cannery, which records indicate their address was in "Locke", was approximately a mile north of where the "historic district" stands today. Sadly, the cannery no longer exists.

One thing people today do not understand is that early on Locke was considered larger than what it is considered to be today.  In fact, back behind the historic district near the slough, there was once a village of about 29 dwellings where Russian families lived. Some of those families worked at the Libby factory, while others made their living as fishermen or working for the railroad. That area was still considered a part of Locke, and those residents are accounted in Census records as being residents of Locke.

When the Locke estate was sold in the 1970s, it was sold in its entirety of 490 acres because that is what it consisted of.  Sometime in the last 20 years or so, the area now known as the Delta Meadows State Park was sold to the Department of Parks & Recreation agency and those Russian families dwellings were demolished. In 2004, more of the original Locke estate was broken up and 10 acres of the town was sold to the Sacramento Housing & Redevelopment Agency, where they proceeded to sell individual to individual homeowners and businesses.

As you can see, the boundaries of Locke  (originally Lockeport) were much larger in its beginnings than the tiny section that is outlined on the maps today. Census records and directories of earlier times show that the residents living within those larger boundaries of George Locke's property and around it, were in fact all "residents of Locke." 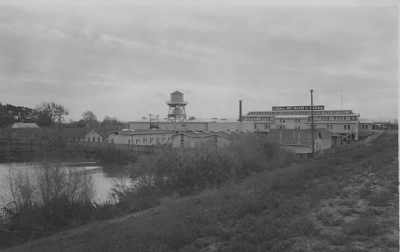