The Locke Boarding House which sits at the corner of Locke Road and Main Street, in Locke, predates the other structures in town by at least a couple of years. According to the NCCSAH the structure was more than likely constructed in early 1910; However, the State Parks Department's website clearly points out that this structure was actually built in 1909, meaning it predates all the buildings in Locke.

It's been thought that the earliest use was as a lodging structure for laborers, more than likely accommodating the Southern Pacific workers, and the workers at the G.W. Locke packing shed on the same property nearby. So far, not a lot of information in regards to who ran the boarding house prior 1921 has surfaced besides a few newspaper articles dating back to 1915, that mention "dormitories" on the Locke property that were used for their workers at the packing shed. The first family we are certain that ran it as a true boarding house, with rooms for rent,  was the Kuramoto family.

Almost all mentions of this building include that the house has not been associated with Chinese residents of Locke. The boarders typically were Caucasian or Japanese, with occasional Filipinos and Indians (Hindu).  According to Peter Cowan, whose father ran a trucking yard in South Locke in the 1950's, many of this building's transient residents were Oklahoma truckers who worked for his father. Peter Cowan said that he also lived in this same boarding house for awhile. Mr. Cowan owns a large portion of South Locke still today (2016), which was part of the Union Oil Company Railyard in the early 1900's, then a few decades later became his father's trucking yard.

The Beginning of Sam's Rooms

Sukiei Kuramoto, Nobu Kuramoto, their daughters Matsue, Kikue and son Eimi came to the United States and the family eventually ended up in  Locke around 1921, when they bought the boarding house, naming it Sam's Rooms. According to interviews with Sam Kuramoto, he claimed that his father loved the name Sam, and that later when he was born in 1928, that is why his father also called him Sam. They also had another daughter, Haruko who was 7 years older than Sam.

The Kuramoto's lived in the downstairs of the boarding house, on the backside of the structure, while the upstairs had the rooms for rent. While maintaining the boarding house, the Kuramoto's also worked in the agricultural field, traveling to Lodi and Stockton to pick grapes and strawberries, or packing asparagus and pears in the packing sheds nearby. At times the family would be gone all week, so the younger children were at home and learned quickly to run the boarding house if needed, while their parents were gone. In interviews Sam Kuramoto claimed that his mother didn't believe in locking the doors to their home, so many times they would come home to find that their furniture or belongings had been stolen. They blamed it on the Chinese residents.

(There was an animosity between the Japanese and Chinese in Locke, which stemmed from various reasons which I will go into further detail in an upcoming blog post.)

By 1936, the patriarch of the Kuramoto family, Sukiei died, leaving Nobu a widow, with children to raise by herself. She continued to run the boarding house by herself, and managed to work in the fields picking fruit and vegetables to make ends meet. Working as a single mother, during the Great Depression, Nobu still had time to maintain a beautiful garden just behind the house, on the east side. There she grew vegetables with beautiful flowers surrounding it.

By the time that the bombing of Pearl Harbor took place, there were rumors that the Japanese might be sent away to camps. According to the interview with Sam Kuramoto for the States Parks, he states that his mother panicked about this, and took everything she owned anyway related to Japan and burned it. She had taught her children they were born in America, and to be proud to be American, so it was apparent that she wanted to prove her loyalty to the country they were living in.

Unfortunately, when the time came in April 1942, the Kuramoto's were forced out of their home and sent to a detainment facility in Turlock. They would spend about three months there, before being sent to the Gila River facility in Arizona. 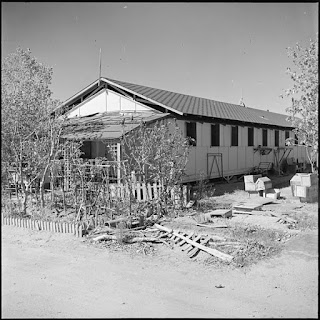 Located 36 miles southeast of Phoenix, sits the ruins of what once was the Gila River War Relocation Center, which once held over 13,000 Japanese-Americans.  Consisting of two separate camps, Butte Camp and Canal Camp, the internment facilities were originally built to house only 10,000 at full capacity.  Despite strict objections from the Gila River Tribe, the site was still used and the camp was constructed over a short two months, and opened on July 20, 1942.

Internees, as they were called, were brought in from as far as the Northern California Delta region, as well as the Central Valley area near Fresno and as far South as Los Angeles. Approximately, two thousand internees from an internment camp in Arkansas were also brought in to add to the population at Gila River. Although it was considered one of the least oppressive camps of its kind, due to the fact they only had one watchtower and the barbed-wire fences didn’t last, it was in no way what you could call “comfortable” living.

Butte Camp had a little over 800 buildings, while Canal Camp had approximately 400. Among the facilities on site were administration buildings, a hospital, living quarters or barracks, mess halls, laundry houses, warehouses, police offices, latrine and shower houses, churches, school houses as well as other buildings to maintain the camp. Shower rooms consisted of a room with a dozen shower heads or so, in a community shower atmosphere. The latrine rooms were just rooms consisting of toilets without stalls or separating areas for individuals. Some living barracks were divided by blankets and sheets or tarps used as makeshift walls that separated one living area from the next.  The term “shikata ga nai”, translated as “it cannot be helped,” was used often to summarize the Japanese internee’s feelings of helplessness in their living conditions.

The Kuramoto's spent 3 years at Gila River until they were able to move to Minnesota to join Nobu's oldest daughter, who had been released and given a job. The family remained in Minnesota until 1949, when Sam joined the Army. They never did return to their home in Locke, although he later recalled driving by on one of their visits to the delta region many years later.

It is hard to imagine being ripped from your own home and taken to a strange place, and having no certainty of what lay ahead. One can only speculate how difficult it must have been for Nobu to be strong for her family during such a trying time.  It is said that when the Kuramoto's were sent to the internment camps, their neighbor Jack Ross (who lived in the house just north of them) took over the boarding house for them. He also ran the gas station and auto mechanic shop in Locke. Now this building is owned by the Department of Parks & Recreation and is used as a museum.

Whenever I visit Locke, the boarding house is usually the first place I visit. Now, every time I see it, I will be reminded of the lovely family that made this house a home, and the sad struggle this family faced during such trying times.