Who's Idea Was It? 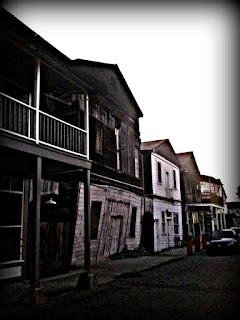 Who thought of moving to Locke first? The answers may surprise you. You see, there is an alternate story that has been circulated and even published over the years, stating that the Japanese were actually the first to think of moving to Locke as a group. Originally, a large amount of Japanese were also living in Walnut Grove's Chinatown. After the fire they were displaced, and no longer wanting to be associated with the Chinese, they approached George G. Locke about moving to his land first.

According to Eiichiro Azuma, the curator at the Japanese American National Museum in Los Angeles, his published work,"Interethnic Conflict under Racial Subordination: Japanese Immigrants and Their Neighbors in Walnut Grove, California, 1908-1941" the story is clearly presented.

Azuma cites sources documenting that after the fire in Walnut Grove, the Japanese immigrants wanted to disassociate themselves from the Chinese all together. Despite what many may assume, the two cultures were very much different and did not get along. After the fire the Japanese wished to rebuild, but this time they wanted a Japantown. Unfortunately the Japanese were divided. Some wanted to rebuild on the Dye brothers' land in Walnut Grove, while others eyed the property of George Locke. Cited sources used by Azuma state that "George Locke demanded $20,000 from the Japanese for the construction of a new living quarter. If they agreed on it, he promised to provide a maximum of $10,000."  The Japanese are the only ones to provide such evidence, and the dates coincide with the Walnut Grove fire, as it was only about a week after the fire that this is mentioned in various papers at the time. The Chinese have not provided any written documentation that the idea to move to Locke was their own. (Japanese Association of Walnut Grove, “Kawashimo Nihonjinkai Kiroku,” October 15, 1915 in JARP; and Nichibei Shimbun, October 18, 1915.)

According to Azuma, once the Chinese heard that the Japanese were planning to move to George Locke's land, they quickly approached George Locke and "hastily signed lease contracts on the most convenient lots on Locke's land."*  There was a personal issue between both groups, one having complaints against the other. The Japanese thought of the Chinese as greedy and "menacing", who lived in filthy conditions and made their money by promoting undesirable practices (ex; gambling halls.)

Likewise, the Chinese thought the Japanese to be vulgar and would not let their children play with Japanese children at school. The opinion of the Japanese people was that the Chinese were "conspiring" against them at all times. From pushing the Japanese farm workers out (who were working the agricultural areas of the Delta since the early 1900's), to quickly flooding into the town of Locke, the animosity between the two groups didn't end there.

There were some Japanese that chose to stay in Locke, despite the high population of Chinese who moved there from Walnut Grove. For one, a Mr. Wakayama opened a barber shop in Locke after being displaced in the Walnut Grove fire.  For this choice he was "excommunicated" by his people, and a letter was sent to his home village in Japan, to shame his family for his "misdeeds." After several years, he was able to clear his name by writing a letter of apology to the Walnut Grove Japanese Association. Wakayama was not the only non-Chinese resident in Locke, though, there were many others.

(*there has been no written documentation presented proving the Chinese signed lease agreements with G. Locke, although the story has been orally passed down.)