Something that I found quite interesting while researching Locke's history was the fact no one had written in depth about Locke's history of prostitution . The soiled doves lived in the town, and from my research, the majority were Caucasian. It wasn't until the 1950's that Chinese prostitutes were more prevalent in Locke, but prior to that all the prostitutes in Locke were always Caucasian.

Documented news articles around 1918-1920, reporting court cases against George Locke, (grandson of George W.), show that he was in charge of the area, not only as the owner of the town itself, but as the "Vice King" as one newspaper dubbed him. 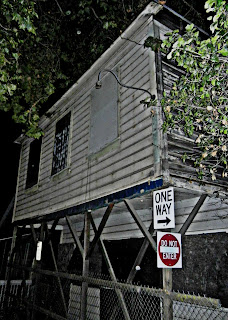 I believe that when the opportunity arose to have the Chinese move to Locke, George G. Locke decided that he would make his property into a bustling place to serve the needs of laborers in the area. I also believe that his son, George R. Locke wanted to oversee that town and make money without all the rules and regulations that other Delta areas enforced.

He knew that all Caucasians were banned from gambling in Walnut Grove, and many laborers felt that was not fair. You can find that in several newspapers of the time period.

The Chinese, Japanese and even Hindu could gamble but the Caucasians could not. George Locke saw a need, one that would make him a lot of money, and he was simply filling the need.  So he let the Chinese set up gambling halls in various buildings that allowed anyone to gamble there, but he also had buildings he owned himself (records show this) where he operated houses of ill-repute under the guise of "boarding houses."

The White House was one of the houses of ill-repute located in the Historic District of Locke. One of the earliest Caucasian women in Locke was Grace Melbourne. Voting Registries of the time period going back as early as 1916, has her listed as a resident of Locke.

Although she was the "madam" of the boarding house, she listed herself as a "housewife" more than likely to avoid suspicion.  There is also a record of one Ruby Allen acting as a madam for the White House as well. Hiring her would prove to be a terrible mistake for George Locke in the near future.

Another one of George Locke's establishments was the New Home Hotel, and then of course the Lockeport Hotel, as newspapers confirmed. According to the National Registry for Historic Places, the listing for the town of Locke claims that the "boarding house" located where the Lockeport Hotel stands, was built by Wing-Chong Owyoung and is one of the original buildings constructed around 1912.  That is very possible, but newspaper clippings with legal notices, such as the request for liquor licenses and such, list George W. Locke & Son as the owners and proprietors of both the hotel and restaurant which they refer to as the Lockeport Hotel. There is also a newspaper clipping mentioning the Locke's requesting to have their Lockeport Hotel reopened after it had been closed down for violating the red-light abatement act.

There are plenty of other newsclippings showing other various Chinese merchants "owning" businesses and even houses of ill-repute in Locke, just not the three listed above (Lockeport Hotel, New Home and White House), owned by George Locke. It seems interesting to me that there are two stories going around about the Lockeport Hotel, yet the documented information of the time period show George Locke and family were the proprietors. (I will be doing more investigating into this buildings history in future blog posts).

The Lockeport Hotel (or the Lockeport House) was and is still located on the corner of Levee and River Road. It is the one that is boarded up across from the Chinese Garden Restaurant. When the lighting is right and the weather is good, you can still see an outline of the words "Lockeport Hotel" on the side of the building, too.

At one time, before the levee was raised, this building had a deck that stretched outward west, and a view to the river could be seen from it.  It appears that at some point the levee was raised about 10 feet or so, leaving all the front facing buildings in Locke to appear to be built up on a hillside, having their first floors to appear underground.