Drugs, Crime and Wild Gambling Raids...Just another day in Locke!

During the 1920s, especially the first few years of that decade, Locke seems to have been one of the wildest and obstreperous places in the state. The "roaring twenties" certainly lived up to its name in that delta hideaway, with constant newspaper headlines and accounts of suspenseful raids and arrests, police chases, cheating gamblers and shoot outs. Locke was known as the place to go to gamble your cares away, find a woman to lie with for the right price, or use as a haven for junkies needing a morphine fix. Opium dens, whore houses, saloons and gambling were rampant in this little town full of vice.

In the earlier years it appears that Locke was able to keep gambling dens full of patrons without issue from the law, but it seems that it may have eventually caught up with them as time went on. 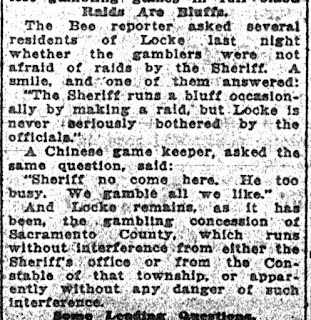 According to one Sacramento Bee article, "Raids Are Bluffs," a resident of Locke claimed that the "Sheriff runs a bluff occassionally by making a raid, but Locke is never seriously bothered by Officials." It goes on to state that "Locke remains, as it has been, the gambling concession of Sacramento County, which runs without interference from either the Sheriff's office or from the Constable of that township*. or apparently without any danger of such interference."---

Still, when those raids did take place, they sure made headlines.

"Lockeport Raid Nets Seven Drug Victims"-
Completely surrounding a house in Lockeport in which it was believed the use of drugs was being indulged in early Sunday morning, netted Deputy Sheriffs W.R. Cook, H.D. Bryant, John Pendergast, George Wittenbrock and George Altucker, aided by Bob Cole, seven prisoners, five of whom were Chinese.

One white girl, Miss Frances Reese, aged 22, and Charles Mehner, white, also aged 23, were among those caught in the net thrown around the building. All were brought to the county jail in this city to be charged with using drugs. A part of the evidence obtained was the finding of a package of more than 1000 morphine tablets on one of the Chinese. He will be charged with running an opium den and violating the state poison act."--- Sac Union, 6/24/1919 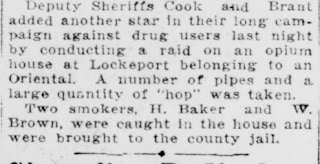 It didn't stop there. Raids on opium dens and gambling houses were just getting started and would continue, as the public officials and law enforcement decided to crack down on Locke.

On March 8, 1920,  Sheriff's deputies Brant and Cook raided an opium den in Locke (Lockeport). As the article in the Sacramento Union states, the raid was one of many in a "long campaign against drug users." Along with seizing pipes and "hop", two of the patrons using the drugs were arrested and brought to jail.

Battering down the wooden doors of an alleged Chinese gambling den at Lockeport, while two deputies with drawn revolvers held a crowd of 30 gamblers at bay, deputy sheriffs from the office of Sheriff Jones raided the establishment of Tin Fan, in the river town last night. 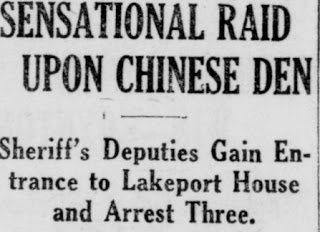 Elaborate plans were made and the raid went through without a hitch. Two of the deputies, dressed in old garments and with several days; growth of beard on their faces, gained entrance to the establishment in the guise of customers.

Tin Fan, the proprietor of the house, suspicious and wary of the strangers, delegated several Chinese to watch them. After remaining in the place for 20 minutes, the deputies drew their revolvers and gave a pre-arranged signal. The officers on the outside broke down the door and lined the patrons of the place up against the wall."-- Sac Union, 11/5/1922


(Copyright 2015- J'aime Rubio,  www.jaimerubiowriter.com )
* George Carlton is mentioned in Sacramento Bee articles as the Constable of Locke, the California Voting Registry for 1920-1922 also state him as the "Constable" in Locke. 1920 Census records state him to be the "Watchman for the Town of Locke."---