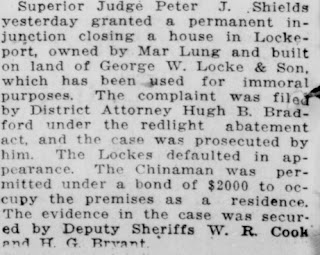 George Locke was not the only one getting in trouble with the Red Light Abatement Act. Other Chinese residents of Locke operating "immoral" houses of prostitution were mentioned in the newspapers of the time, including Mar Lung.

According to the October 24, 1919, issue of the Sacramento Union newspaper,  Judge Peter J. Shields granted a permanent injunction on one of the houses of ill-repute in Locke whose business was owned by Mar Lung, and built on land of George Locke.

District Attorney Hugh B. Bradford pressed charges on both Mar Lung and George Locke. As the story is reported, Mar Lung was able to remain at the building so as long as he only occupied it as a residence, and nothing  more under a $2,000.00 bond.

This was not the first, nor would it be the last of newspaper headline scandals regarding Locke's morally loose view of prostitution, or blatant disregard for the law. In fact, just a few months earlier in the same year, the headlines reported an extortion scandal which was allegedly claimed by Grace Melbourne, one of the madams of Locke (Lockeport).

The April 3, 1919 issue of the Sacramento Union newspaper states that Grace Melbourne had been paying for protection from the district attorney and sheriff's office. Within a six month period she had paid out approximately $1,500.00.  A former sheriff's deputy, J.C. Calvert testified in front of Judge Busick on this matter. Calvert, a resident of Walnut Grove, had only been on the job as a sheriff's deputy for 10 days before being forced to resign because of his stance on the matter.

"About a year ago I had a conversation in the White House with Grace Melbourne and she said: 'I'm getting -- --- good and sick of running a house of prostitution. I have been under heavy expenses here.'

"She said she had paid within the last six months $1500 for protection from the distric attorney's and sheriff's offices."

"I was appointed last January by Sheriff Jones as a deputy and held the position for 10 days. Jones requested me to resign...for the good of the sheriff's office and the district attorney's office."---  statement by J.C. Calvert (Sac Union 4/3/1919) 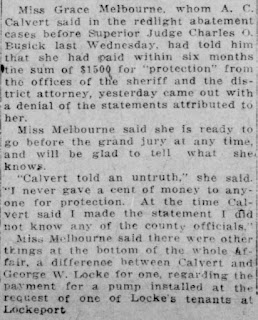 Only two days after the story broke, the newspaper ran another piece, this time with Melbourne adamantly denying she ever made such statements to Calvert.

"Miss Grace Melbourne, whom A. C. [sic] Calvert said in the redlight abatement cases before Superior Judge Charles O. Busick last Wednesday, had told him that she had paid within six months the sum of $1500 for "protection" from the offices of the sheriff and the district attorney, yesterday came out with a denial of the statements attributed to her.

Miss Melbourne said she is ready to go before the grand jury at any time and will be glad to tell what she knows.

"Calvert told an untruth," she said. "I never gave a cent of money to anyone for protection. At the time Calvert said I made the statement I did not know any of the county officials."

Miss Melbourne said there were other things at the bottom of the whole affair, a difference between Calvert and George. W. Locke [sic] for one, regarding payment for a pump installed the the request of one of Locke's tenants at Lockeport."--- Sacramento Union,  4/5/1919

Whether Grace Melbourne was being extorted by the city officials and Calvert had the conscience to tell on them, or like the latter article describes, there may have been an actual personal vendetta against George Locke that brought this whole ordeal to the forefront, we may never truly know. As I will show you in future posts, the town of Locke was full of notorious scandals, and George Locke had a part in a lot of it.

You must remember though, this was not the original George W. Locke, he had died in 1909. The George Locke you will be reading about in future posts that are tied to scandal would be his grandson, although the newspapers of the time more than likely assumed they all had the same middle initials.